August 15, 2011
I don't do much modding myself and much rather like to admire other's work.  I was watching Drac's review on the Max Force Crossbow-65 when I was inspired to make a Nitefinder shoot the same(ish)  way.  This mod is also like a mini Big Bad Bow that shoots darts.

So to do this mod, you'll need:
Nitefinder
Rubberbands (As many as you want)

First, make sure the blaster is deprimed.  Then place one end of the rubberbands under the barrel and place the other end around the lip on the front to the priming handle.  Ta-da!  You now have a Nitefinder that shoots 5-10 feet farther.  Combined with other mods, you may be able to really blast away the competition. 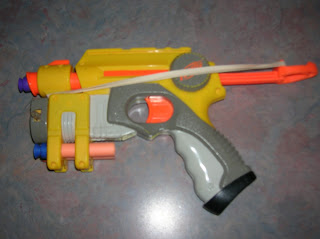 Note: After long use, there is the potential that this mod can ruin your blaster, like all other mods.

*Warning:  Modifying Nerf guns can be dangerous if not done properly.  Never shoot modded blasters or darts at people if you would not want to be hit by it yourself.*
Happy Nerfing!﻿
ex-3 mod modify nitefinder rubberbands simple